A galosh factory, which was established in 1898 by Mr. Eduard Polón. First it manufactured rubbery footwear, but soon the factory expanded to tubes, mats and tyres.

In 1918 the company bought Nokia Aktiebolaget (est. in 1865), which was then a small wood processing company. In 1922 they bought also Suomen Kaapelitehdas (est. in 1912), which was a wire and cable maker. Those were possibly the most important acquisitions of the Finnish industry, and the start of the Nokia story.

In 1966 those three companies were merged and Nokia Ltd with its fascinating mobile phone future was formed.

Later, in the 1980’s and 1990’s Nokia decided to leave the rubber business. The shoes were sold to Nokian Jalkineet Oy (Nokian Footwear) and the tyre business is now done in Nokian Tyres Ltd.

The share of Suomen Gummitehdas was listed in the Helsinki Stock Exchange from 1931 to 1966. Since 1966 shares of Nokia Ltd have been traded. In addition to that, there is also the shares on Nokian Tyres in the exchange. 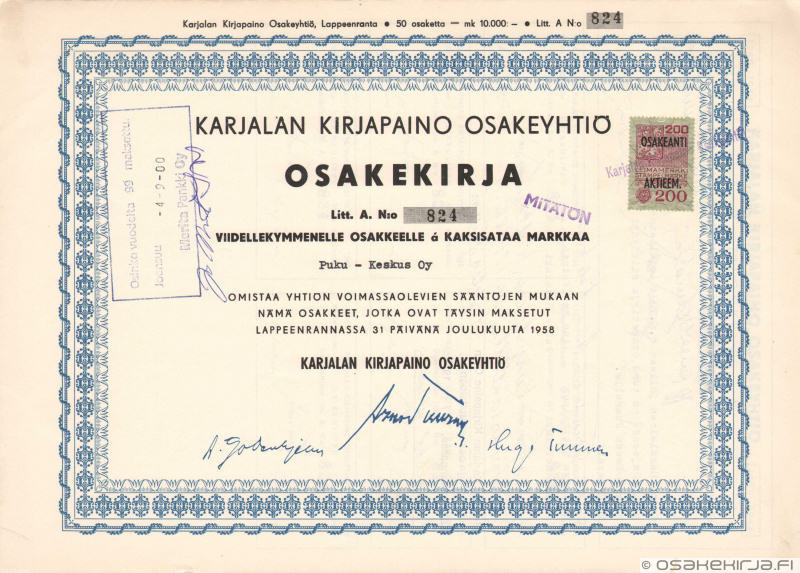 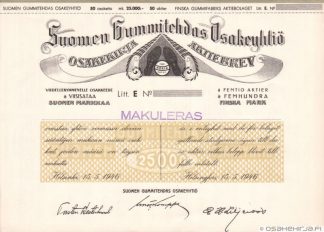 You're viewing: Suomen Gummitehdas Osakeyhtiö Not for sale
Read more